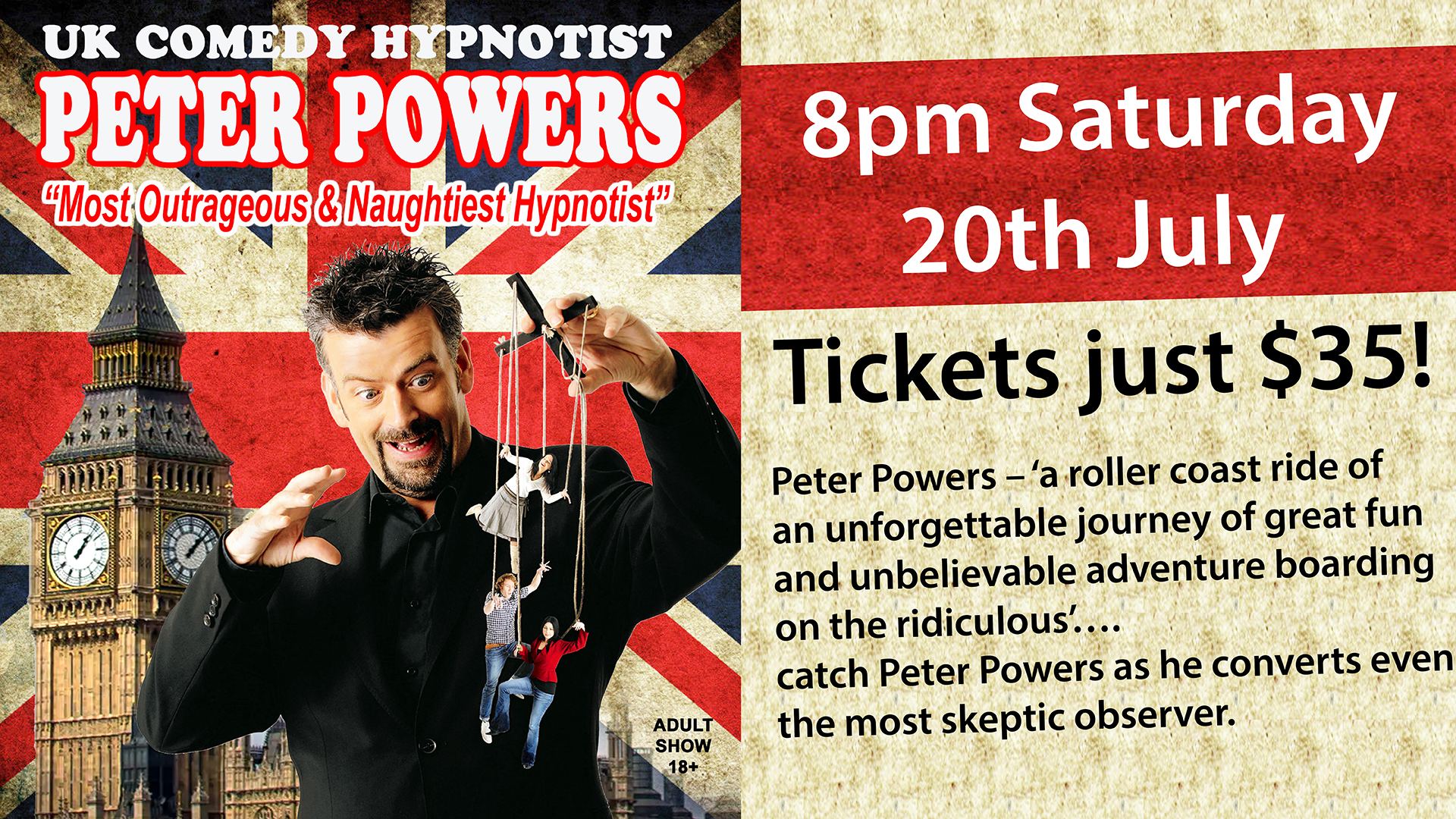 Peter Powers is the world’s funniest hypnotist and one of the most successful hypnotists in the world today and it is not too surprising. His live stage show draws crowds much larger than any other hypnotist in every one of the countries he performs, making him ‘the biggest box-office hypnotist’.

Peter Powers has starred in and presented 60 of his own television shows in five different countries and broadcast in more than 30 countries worldwide. From 2015, Peter featured in a series of his own TV Shows including ‘Mesmerised’ that were aired on prime time on the Channel 7 Network. Peter was a regular and a favourite guest on the Channel 9 Footy show.

Referred to as “a comedy genius”, “a hypnotist without equal” and “the best in the business”, Peter delights in the antics of his hapless volunteers almost as much as his audiences.

Peter’s upcoming live shows will have lots of new fun and outrageous routines where the audience can expect the unexpected. In fits of hysterical laughter, Peter seems to lose himself in each performance, pushing the boundaries of standard hypnotic fair and raising the bar with unique and truly whacky routines. All of this is delivered with a somewhat wayward humour in his distinctive, mischievous and impish style. Although the observer experiences a rollercoaster ride, on the very edge of what could be considered sane and proper.

Beneath the well publicised image of ‘evil’ and ‘wicked’ he tries hard to portray, there is a warmth, playfulness and overwhelming sense of trustworthiness that belies it. If you’re out to have a great time, you won’t leave a Peter Powers’ show disappointed! Whilst his volunteers live out their wildest fantasies or experience their worst fears, the audience is thoroughly entertained as they indulge themselves in this bittersweet adventure!

For just a short while, Peter Powers invites the participants to escape the drudgery and woes of the world to be treated to a wonderful state of bliss, fantasy and ultimate relaxation of both the body and mind while the audience enjoys a night of hilarious entertainment with jaw-aching laughter.

Peter Powers – ‘a roller coast ride of an unforgettable journey of great fun and unbelievable adventure boarding on the ridiculous’…. catch Peter Powers as he converts even the most skeptic observer.